We made preparations to go on leave to the UK, but this time it was different. Dad brought out the crates from the garage and started to repair them.

Flight and quarantine accommodation were arranged for Petro the dog, the cats Pisa and Gopi the third. Sadly, just before our pets were due to fly, a wild animal killed Gopi.

Our servants Ogano and Okero wanted to come to the UK. The thought of two servants each with four wives, and numerous children, living with us in suburbia would give ‘keeping up with the Joneses’ a new meaning. My father gave them several thousand shillings each and train tickets to their hometown of Kisumu.

The heavy crates were sent ahead and after saying a fond farewell to our friends in Kampala, we boarded the train to Mombasa. In Mombasa, we had a few days to spare before embarking onto the ship, so my sister and I spent a day swimming and sunbathing at Nyali beach. On returning to our hotel both of us were sick (as a dog) with sunstroke. I had never used sun protection before and this was the first time I’d been burnt. Not the sort of souvenir you wanted from your last days in East Africa.

The next day, we boarded SS Braemar Castle, waved to friends and then set sail up the African coast.

As the ship entered the port of Aden, little boats would come alongside to sell souvenirs. Amongst the boats were boys who dived into the harbour to retrieve coins thrown by passengers. 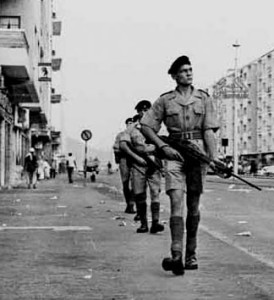 We had friends ashore and spent part of the day just outside of the town on the beach. At this point in history British troops were battling the NFL (National Liberation Front) and FLOSY (Front for the Liberation of Occupied South Yemen). Soldiers were patrolling the streets and for some reason this didn’t seem to worry my parents enough to stop my siblings wandering around Aden by themselves. We later rendezvoused with them and returned to the ship.

At Suez, my mother and I jumped ship and took off for Cairo. We visited the Egyptian Museum of Antiquities to see Tutankhamen lying in state, it was impressive. I have subsequently seen it twice more, only to find the exhibits becoming a bit dilapidated by theft and lack of care.

We had a quick look at one of King Farouk’s former palaces and some of the hundreds of classic cars he used to own. Nasser was the driving force that overthrew him in a coup in 1953 when Egypt became a republic.

Next stop, the Great Pyramid of Giza, which involved, to the horror of my mother, me being snatched and placed upon a camel, then we made a back-breaking walk into the centre of the pyramid. Later in life, I repeated the experience and even managed to climb to the top of a pyramid.

Then it was time for quick refreshments at the Cairo Hilton and a mad dash to Port Said to catch the boat. Later my sister told me she thought we had missed the boat at Suez before it proceeded through the canal.

We experienced a pleasant cruise across the eastern Mediterranean Sea before a night passage through the Strait of Messina. I watched lava spewing high into the night sky from Mount Etna, it was just like a firework display. This was not the first active volcano I had seen. On previous voyages we sailed around the island of Stromboli, as well as taking a drive up to the lip of Vesuvius.

The Foreign and Commonwealth Office, my dad’s employers, was paying for our voyage to the UK. If we chose to disembark at Naples, the money saved by not continuing our journey by ship could be used to drive across Europe. The catch was we had to arrive in the UK on the same day as the ship did. Our car was lowered onto the dock and we set off.

Our route took us via Rome, Florence, and Lugarno where we crossed into Switzerland. As we climbed St Gotthard Pass, my mother saw people skiing and asked dad to pull over. Mum stepped out of the car and declared, “let’s have a snowball fight” and put one foot forward. Her leg plunged deep into the snow right up to the hip and the rest of her would have followed if dad hadn’t grabbed her. She had just stepped off the side of a mountain.

We were stopped at the Swiss-German border, apparently my passport was not in order. I was born in a country that didn’t exist anymore ‘Tanganyika’, ironically it had been a former German colony. Rather than go on without me, the family turned around and headed to the nearest consulate for the necessary paperwork.

Having succeeded in entering Germany and before they could change their minds regarding my papers, we proceeded to the nearest exit, Belgium via Cologne.

Taking a break from their children, our parents went sight-seeing in Brussels. On returning to the hotel arm-in-arm, a woman tried to wrestle my dad away from my mum. My mother hung on to him only for a repeat performance by another woman. It slowly dawned on them that they were walking through the ‘Red Light District’ and the local prostitutes didn’t like the idea of any outside competition.

We drove on to Ostend and boarded a ferry to Dover. We were finally in the UK. After moving into a rented cottage, we visited our pets who were still in quarantine.

I was in a strange land, the population spoke in a funny way, the climate was cold and I was the only teenager in Britain donning shorts.

Previous Post: 59 – From a paradise to a pariah state