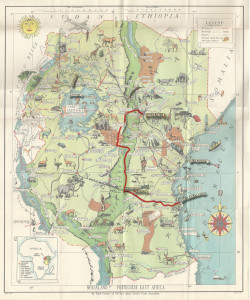 Driving from Dar es Salaam to Nairobi is a long way, especially if you are making a detour. We headed inland to Dodoma, entered the Great Rift Valley on the Arusha Road, then went through the Ngorongoro crater and the Serengeti Plains. We crossed into Kenya where the Maasai Mara National Reserve is today. This route took us to Narok, where we re-entered the Great Rift Valley and continued to Nairobi.

In one paragraph I have described a route, but not a journey. Most people would give their eyeteeth for such an experience, all I had to do was sit in the back of the car with two cats and look out of the window. I may have been young, but along with past and future safaris, I appreciated them all.

We stayed in what I can only describe as an army camp consisting of wooden huts. This was a stop gap before we were eventually relocated to an apartment in the centre of Nairobi. 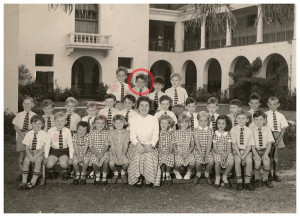 I was sent to Nairobi Primary School and soon after joining I came down with chicken pox. It was at this juncture, Peggy, my mother’s youngest sister arrived from India to live in Nairobi. She was the one who had polio when a toddler.

During the partition of India, she was staying with one of her sisters. Every day, beggars would call out from the garden gate and someone from the house would take a basket of food to feed them. On hearing a cry, my aunt Peggy volunteered to take food to the gate. She arrived to find a man writhing in agony, his arms and legs had been cut off while dogs attacked what was left of him. There was widespread violence between the various religious groups, about a million people were killed. The shock of this experience affected Peggy’s mental health and it took a long time for her to recover.

Peggy was very sweet, she settled down in Nairobi for a year or so before moving on to join three of her sisters in Australia.

After a few months, we moved to Lavington Green just north of the city. Nowadays Lavington is a built-up suburb, but back then there were fewer houses and a wide open valley in front of ours, from which we could see Mount Kenya. The move also meant I had to transfer to a new school, my fourth in as many years.