The East African Safari Rally was a gruelling motor race through rough terrain and most of the winning drivers were local, but that didn’t stop famous outsiders from competing. Stirling Moss (Grand Prix legend) and his sister Pat Moss-Carlsson both took part in the sixties. During a stopover at one of the staging points outside Kampala, I managed to meet them both.

Mum’s car was an MG Sport that didn’t rally, except downhill. It wasn’t designed for Kampala’s hills; it took some feat to climb just the gentlest of slopes. Mum sold the car to a friend. I suspect the new owner struggled to stay friends with us after their drive home to Kololo, the neighbouring hill. 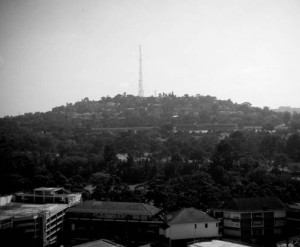 Kololo had an airfield also known as Independence Park. Once a year, we would amble over for anniversary celebrations and watch the Ugandan Air Force fly past. Prime minister Milton Obote and the president, aka King Freddie, took the salute.

Finally, it is hard to find an Eskimo in Africa, let alone one with an igloo. Sadly, I have no pictures of my sister dressed up as one at a trade show, promoting a refrigeration company and being introduced to the prime minister.

Previous Post: 57 – The riding crop and other parties
Next Post: 59 – From a paradise to a pariah state